Ah, the Pound 'o Dice, a gamer classic that never goes out of style. Just as the name suggests, the Pound 'o Dice give you a bag with a full pound of gaming polyhedral dice that you can buy for a surprisingly low price.

The assortment includes somewhere around 100 dice on average -- though the exact number varies. Every dice included are standard-sized (roughly 16mm). Since it's random what dice you get in the bag, and different dice types have different weights, the exact number varies from pound to pound. The Pound 'o Dice is a fantastic and cheap way to increase the size of your dice collection -- it's also a great way to have those extra dice on hand that you need for when other gamers show up and forget their dice.

Pound of Dice - Kinds of Dice

When you buy the Pound 'o Dice the bag includes a wide assortment of different dice styles and different polyhedral types; however, the dice types in the Pound 'o Dice are weighted to favor d6, d10, and d20, ensuring that we gamers are likely to get good numbers of the kinds of dice that we use most often, rather than ending up with a giant stack of d4 (which could be useful as caltrops, but no one's magic missile uses that many d4s).

As you'd imagine the dice styles in the Pound 'o Dice tend toward the cheaper dice types. You'll see lots of speckled dice in here, as well as what seem like some kind of horrible dice-making accidents where two colors blend together in a way that seemed clearly not intentional. But in addition to those lower quality dice, you also get various Chessex premium dice, and each Pound 'o Dice will include at least one full 7-dice set of dice that, according to Chessex, aren't available anywhere else. However, as Balthazar shows in the video, just because it's a matched and unique set doesn't mean it's necessarily attractive.

That does make me wonder, just a bit, whether they manufacture this special dice set just for the sake of the Pound 'o Dice, or if those special dice are from an idea they had once then decided no one would ever want to buy them.

Either way, the Pound 'o Dice gets the full-hearted endorsement of Awesome Dice. As owners of a couple Pounds of Dice... plus the occasional scoop of dice from GenCon booths, the Pound 'o Dice bag is something that no true gamer can resist!

I only had three 12-sided and three 10-sided (tens) dice in my bag, which was disappointing. The rest were a nice variety with decent quality and a few gems.

Good quality dice with lots of character. I was able to curate four sets as well as add some unique dice to some of my board games. Great way to increase one's hoard! 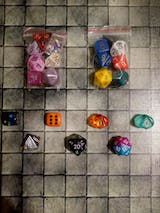 A bunch of dice for a good price! Dice are a variety of colors and types that is good just if you need a bunch of random dice for gameplays

Came in as expected, mostly not the most beautiful dice, but now I have enough dice to run a game on my own without others having to bring any.

Also there were a few fantastic dice, I got 4 beautiful d4, and a few very cool d20s and d6.