Skip to content
US Customers: 99¢ Shipping for Orders Over $35

The Fodders: Epic Gaming of the Nameless

I’ve always preferred one-shots (or two-shots) for certain types of games, like Cthulhu or Little Fears. And I’ve always preferred campaigns — the longer the better — for others, like D&D, L5R, and World of Darkness. But one of my fondest gaming memories was something in between: an epic weekend-long Pathfinder game. 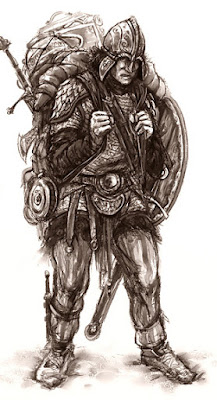 The game was the perfect vehicle for the creative GMing genius of longtime friend and epic gamemaster Dan. In the game, we all played members of a special, and extremely large, extended family known as the Fodders. The Fodders had many strict traditions that governed their way of life.

The critical element was this: none of them had a name. Acquiring a name was the greatest ambition of every Fodder, and those with names were looked upon with reverence — they were like demi-gods, on a different level from mere mortals.

The very strict traditions of the Fodder clan stated that:

And so we merry group of young Fodders, under the careful direction of the clan elder, the Godfodder, set out into the world to serve the Named and try to distinguish ourselves enough to earn a name ourselves.

We were, of course, henchmen and torchbearers serving the heroes that would normally be the player characters in a campaign. And there was an epic campaign happening — good vs evil and the world at stake. But we were only tangentially aware that these epic happenings were occurring. We were busy carrying torches into dungeons so the Named could see and fight the legendary foes; we were staying up on guard duty (or trying to stay awake) and keeping watch; we were on more than one occasion investigating strange corridors where the Named suspected there might be a trap and determined it was best if we went in first.

We died a lot.

Then made a new nameless Fodder, on the same quest as all Fodders, and rejoined the fight.

We set off with the idea that we had to distinguish ourselves in heroic acts to gain a name. But when the first Fodder was finally named by the Named, it wasn’t for something heroic. I don’t remember what it actually was — but it was along the lines of a Fodder who was sick from eating poison (food taster for the Named) and had horrible runs. Then that Fodder was investigating a corridor for traps, failed a Con check and suffered explosive diarrhea. The Named they started calling him Sir Crapsalot.

It didn’t matter how insulting the name was — it was a Name. In the alternate reality where the campaign was about the heroes — the Named — the random NPC crapping himself in the dungeon was hilarious and suddenly that NPC had a nickname, which made him memorable. As that game continued the players would ask the DM about Sir Crapsalot and he would be more and more a part of the story. No longer a nameless henchmen; suddenly a character the players cared about.

As you can imagine, the weekend-long game was hilarious. It was filled with ridiculous and callous requests from the Named, and crazy efforts on the part of the Fodders to distinguish themselves (particularly once we realized doing something funny could earn you a name). There were many ridiculous and hilariously inevitable deaths.

But it was also kind of poignant.

It was the story of a bunch of nobodies who just wanted to be a part of the story They were on the outside looking in and wanted more than anything to be on the inside, to make a difference, to be remembered when we were gone. To have a Name.

In the end we all got names, became level 1 characters and got to participate in the epic story and battle the forces of evil. I honestly don’t remember if we won, or if we all died in the final battle. I remember that final battle was grim and things weren’t looking good, but I don’t actually remember the outcome. But then, it doesn’t really matter if we won or died — because either way, we had names, and what we did made a difference in the world. We became part of the story.

I don’t know if there’s any game I’ve played that bettered captured all the great things about gaming: great fun, huge laughs, friends having a good time together — but also at the same time an underlying story with a deeper message. A story that sticks with you years later, that you think about now and again while riding the train, or nodding off to sleep at night. A story that makes you think about gaming, and your friends — and makes you long to game with them all again.